In Part 1 I ended by asking the probing question: Why did Jesus attract drunkards, harlots and tax-collectors instead of repel them? After all Jesus is the proverbial “goody-two-shoes” of the universe–the very personification of the catch phrase “holier than thou.” Yet sinners at the bottom of the barrel desired to be his friend. Why didn’t Jesus’s perfection turn them off?

The only answer I can come up with is– LOVE. It is easy to recognize when one is being loved for the sake of love. In other words when love is the end, rather than a means to an end, love is in its most pure and attractive form. They knew Jesus loved them and accepted them as persons of worth even thought he didn’t accept their behavior. For as Jesus said to the woman caught in adultery, “Neither do I condemn you. [But] Go and sin no more.”

Jesus refused to assign worth based on works, merit or deserved status–he affirmed their worth to God. That being said he did not excuse people’s sin when he found them ensnared in it. His entire purpose in exposing the immorality of the woman at the well (Jn 4) was to bring her sin into the light for the purpose of repentance and freedom. In the eyes of God sin is not principally defined as “religious law-breaking.” Sin is anything that misses the mark of God’s ideal and enslaves us to a life that is less. Therefore repentance opens the door to God’s ideal, allows us to let go of a lesser way to live our life and ultimately enlarges our future in terms of “walking in the light as He is in the light” (1 Jn 1:7).

This is important because of many of today’s pharisaical Christian voices like to justify their extreme stance of isolation from the world and their self-proclaimed role as condemner of the world by conjuring up vidid images of themselves as modern-day prophets declaring, “REPENT OR GO TO HELL!”

Much can be said of this, but to suffice it say that Jesus, the One who wrote the book on why mankind must repent, chose not to use his harshest words towards the most obvious and most noticeable of sinners in his society. Indeed there was universal agreement in the 1st century that harlots and despised tax collectors were (of all people) cut off from God, sinners without hope and on their way to eternal damnation. Yet it is these hopeless, marginalized and despised people that Jesus becomes identified with the most. I can’t quite put my finger on it, but it’s almost as if they had a relaxing influence upon his demeanor and he enjoyed their company the most.

It was the outwardly pious who lived within a self-erected form of pseudo-spirituality that he couldn’t stand and had very little patience towards. But of course he died for them as well, saying in his last breadth, “Father forgive them for they don’t know what they are doing” (Lk. 23:34).

But again–why did Jesus have more patience…and dare I say affection…for drunkards, prostitutes and tax collectors than he had for Pharisees whose outward demeanor exemplified a life of nothing less than strict observance to the law and righteousness? In fact Jesus would go so far as to say of the Pharisees: “Most certainly I tell you that the tax collectors and prostitutes are entering the kingdom of heaven before you“ (Mt. 21:31).

Jesus said, “I came into this world for judgment, in order that those who do not see will see and those who do see will become blind.”

Some of the Pharisees who were with Him heard these things and asked Him, “We aren’t blind too, are we?”

“If you were blind,” Jesus told them, “you wouldn’t have sin. But now that you say, ‘We see’—your sin remains.”

And therein is the key. The Pharisees saw themselves as self-sufficient and self-justified and rejected the view that they were in need of anything Jesus could offer them, such as spiritual sight and life. The prostitutes on the other hand knew they were blind, destitute, hopeless and morally bankrupt. They had an internal readiness to admit their blindness. Therefore judgement for the time being would be deferred. In contrast the Pharisees could not find forgiveness because they could not find their sin! Their profession of sight was their own blindness in its terminal stage. They are like a sick patient who cannot benefit from a cure because they refuse to acknowledge the diagnosis. A person will never admit he has been found if he is unwilling to admit he was first lost. If there is anything Jesus is seen to have zero tolerance for– it is self-righteous pride rooted in self-justification.

I wonder if Jesus would say the same towards many of us in the church today. Outwardly we dot all our spiritual “i’s” and cross all our “t’s” but inside we are a poisonous well of sanctimonious disfunction dominated by a critical, judgmental spirit that finds it easier to condemn the world to hell than give it a helping hand. We must be wary of any seed of self-righteous piety that equates rule-keeping, with the “good news.” Grace is a foreign concept that doesn’t make any sense for those that want to be religious account keepers. One of the principal reasons the gospel is “good news” is because as far as sins are concerned, God, though Christ, has stopped counting! As 2 Cor. 5:19 explains, “God was reconciling the world to himself in Christ, not counting people’s sins against them. And he has committed to us the message of reconciliation” (2 Cor. 5:19). A church that feels compelled to “maintain the books” on people’s past sins cannot be a voice of reconciliation and will loose it’s ability to meet the lowest sinner at his greatest point of need–hope and truth. Pharisaism is a disease that is one of the church’s greatest threats.

The other threat is lawlessness, worldliness and seeking to be accepted, affirmed and celebrated by the world. Some will bend any core doctrine, make any compromise, and radically redefine truth and value if in the end it means they can keep their “pet” sins and maintain an intimate friendship with a world that is hostile to God’s aim to bring us into greater and greater holiness. God loves us for who we are right now, but he has very real plans to change us. This will require a death to our old way of life. At times it will be painful, humbling and unappealing–but in the end it will be worth it. As the Word tells us, “God disciplines us for our good, in order that we may share in his holiness. No discipline seems pleasant at the time, but painful. Later on, however, it produces a harvest of righteousness and peace for those who have been trained by it” (Heb. 12:10-11).

So yes–there is a cost to our discipleship. And the cost is our allegiance to our old way of life. God loves us too much to let us remain the way we are. God’s forgiveness has enlarged our future. However our refusal to put to death the deeds and “desires of the flesh that war against [the] soul” (1 Pet. 2:11) correspondingly shrinks that future.  Again as the scriptures say, “The mind governed by the flesh is death, but the mind governed by the Spirit is life and peace” (Rom. 8:6). Life and peace–two commodities the world cannot give us. Bottom line–we are not called to be friends with this world’s value system. Rather we are called to be set apart. But that doesn’t mean we hide in our churches, affirm and stroke each others spiritual egos and collectively say, “I thank you God that I am not like other men–robbers, evildoers, adulterers–or even like this tax collector” (Lk. 18:11) 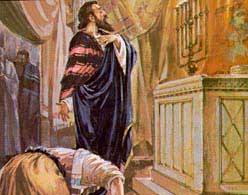 Self-righteous piety and worldliness–they are two of the most dreaded toxic poisons any church can swallow. As in most things in life there are two ditches on either side of the path of life and Christianity usually swings back and forth like a great pendulum between the two extremes with very few people letting go at the right time and finding the road of balance beneath their feet.

The Church desperately needs to cultivate persons whose outlook on life is to be capable of being “all things to all men so that by all possible means I might save some” (1 Cor. 9:22-23). I love the fact that Paul could hang with the rough and rowdy Greeks and pagans, but he could also hold his own with the stoic, cynic philosophers in Athens– not to mention break sabbath bread with the strictest of Jews who still lived under the mosaic law. He was unafraid and multi-comfortable with different elements and personalities–just like Jesus. Yet I feel the church in some circles has become so rigid and inflexible that we simply want to make xerox copies of our flat, two dimensional spiritual lives and proclaim it as the gospel.

We need an army of 3 dimensional Christ followers– true disciples whose internal depth of understanding, compassion and truth goes beyond surface appearances on a Sunday morning. Let it never be said of us, “they have a form of godliness but deny its power” (2 Tim. 3:5).

Hi, I'm Matt. "Strider" from Lord of the Rings is my favorite literary character of all time and for various reasons I write under the pseudonym "StriderMTB. As my blog suggests I seek to live out both the excitement and tension of a Christian walk with Christ in the 3rd world context of Asia. I am unmarried yet blessed to oversee an orphanage of amazing children in South-East Asia. I hate lima beans and love to pour milk over my ice-cream. I try to stay active in both reading and writing and this blog is a smattering of my many thoughts. I see the Kingdom of God as Jesus preached it and lived to be the only hope for a broken world and an even more broken and apathetic church.
View all posts by StriderMTB →
This entry was posted in Church and Culture and tagged Christian pharisees, Jesus and tax collectors, Jesus loved sinners and prostitues, Modern day pharisees in church, Pharisee religion. Bookmark the permalink.